One of these is the emergency calling number (in Australia 000), in particular for mobile devices (in Australia 112 will work on all GSM mobiles).

The meeting has reached a Resolution calling for members states to introduce a single number to access local emergency services from mobile phones. The guidelines recommend either 112 or 911 as this number.

The relevant resolution also explore the possibility of a single global number for emergency service access, although acknowledged that any such move would be a long way off.

I thought I’d run some quick numbers. The sources, Wikipedia’s list of emergency numbers (which the site acknowledges are in need of updating) and  UN Population figures.

About 135 countries representing 6.2 billion of the world’s population have some sort of consistent numbers for access police, fire and ambulance services. These numbers may be different for each service or vary in different parts of the country, but they’re not the numbers for a single station. Wikipedia lists 60 two to four digit emergency numbers. The most common is 112, used as a primary emergency number in 48 countries, whilst there are 35 numbers that are only used in a single country. 999 most well known for its use in the United Kingdom is the second most popular with 911 coming in at number 3, being used in 12 countries.

Population is a different story however. 110 is used by 1.9 billion people mostly in China (where it is the main number for police). In fact the top 6, whilst all used in other countries (with the exception of 120, the number for Chinese emergency medical services) are the emergency numbers for China and India. In terms of population 112, 999 and 911 come in 7th, 8th and 9th place.

Australia’s 000 is unique, no other country uses this number. Other countries with a unique emergency call number include Pakistan, Mongolia, Maldives, Iran, New Zealand, Suriname, Venezuela and North Korea, although the numbers used may be the same as those for one emergency service in another country. Overall though 112 is the dominant number, followed up by 999 and 911, together accounting for more than three quarters of uniform emergency numbers. 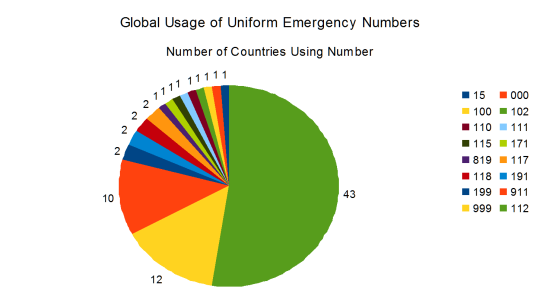 Population tells a similar story, except here the sheer size of the USA puts 911 into second place. 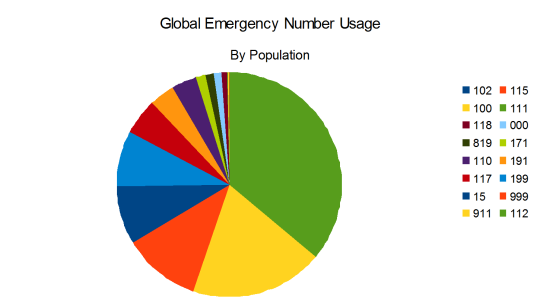 Europe’s push to adopt 112 as the emergency number across the eurozone appears to have cemented its place as the dominant emergency call number. It also enjoys use in parts of Asia, Africa, South America and the Pacific. 911, though popular comes in third place by most measures. Outside of the Americas it is only used in Fiji.  However by the numbers (and the dominance of American television notwithstanding) there’s a strong case for adding 999 to the global emergency numbers for mobile phones especially as it enjoys widespread use outside of the Americas.

Having a uniform number in a country appears to be key to promoting its global reach, and would be the first step towards any push for single global emergency number.

Although Australia does have a uniform number, it’s not any of the big three. This does not bode well for us keeping triple zero into the future.